MARCH SALON: An Artists' Round Table 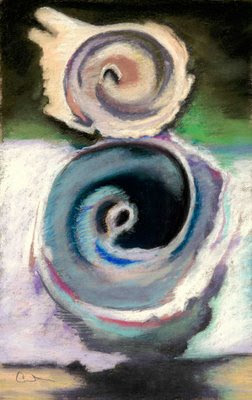 Recently I was invited by Ditto Editions of Salem to take part in a panel discussion about marketing as part of Ditto's continuing Salon Nights series, held at the Salem State College Enterprise Center.
The Salons are a great service to the arts community, covering all topics of the business of art marketing, from networking etiquette to web and blog design.
Above:  Shells by Carol Dearborn, pastel on paper
Organizer and speaker Susan Fader, co-owner, with husband Nick, of Ditto, offers the unique perspective of a rich background in many branches of the arts, from her schooling and experience in studio art (her new work is with vintage and antique turned wood and other found objects) to heading advertising and marketing firms.
For this Salon I was asked to talk about the evolution of my career from portraiture and other privately commissioned works to exploring a more public vision of ecological themes, marketed in part to corporations.
Other panel speakers included Karen Harvey Cox,  Joan Colt Hooper and Joan van Roden White, artists who have chosen completely different avenues of marketing, from privately held receptions to web marketing.
In addition to local coverage by Ditto, the Boston Globe gave us the following write-up:

ARTISTS NETWORK: Like most people, artists are struggling in the tough economy. Ditto Editions, at the Enterprise Center at Salem State College, wants to help.

It hosts Salon Nights the third Wednesday of each month to guide artists in becoming successful business people.

Marketing is the subject explored Wednesday. During a round-table discussion, artists who have identified markets for selling their art share their approach and experiences.

Panel members include Carol Dearborn and Karen Harvey Cox. Dearborn discusses use of networking and other forms of promotion for seeking and developing corporate accounts and public venues for her art. Cox talks about expanding awareness of her art through etsy.com.

Posted by Carol Dearborn at 2:08 AM No comments:

Inquiries about the techniques I created for many of the textile paintings in my WILD MYSTERIES show of 2007 led to offering a one-day workshop on February 12, 2008 at Marblehead Arts Association, Marblehead, MA. 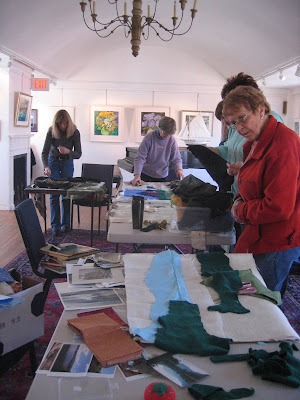 I had never tried teaching these methods before, but was confident students of all levels would be able to bring at least one work to completion during the 10 am - 4 pm workshop. 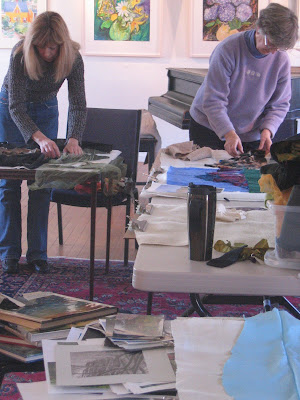 Large tables had been set up throughout the Marblehead Arts ballroom space.
Instructed to bring scraps of recycled threads, yarns and fabric of all kinds, people showed up with huge bags of amazing materials.  Everyone shared what they had, so if you needed a striped silk or a black cut velvet, you were sure to find it somewhere in the room. 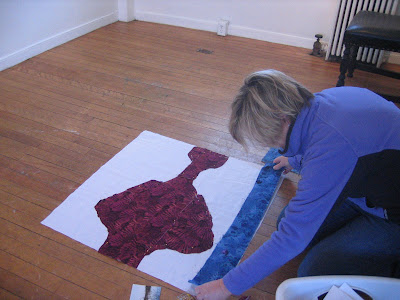 One participant's fabric source was apparently the cutting room of a local couturier - great idea.  The thrift shop is another good place.
Step one:  choose a large piece of linen or loosely-woven, light-colored material to serve as your canvas and lay out the basics of the composition. 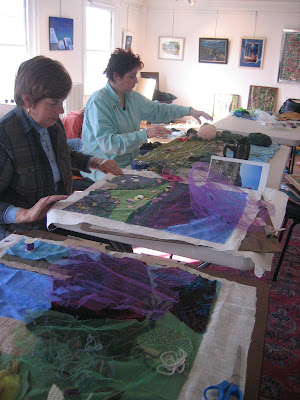 Affixing with pins, add smaller compositional elements, playing with the effects of various prints and textures.
Bunched-up yarns and other stringy things translate beautifully into natural elements, even from a short distance. 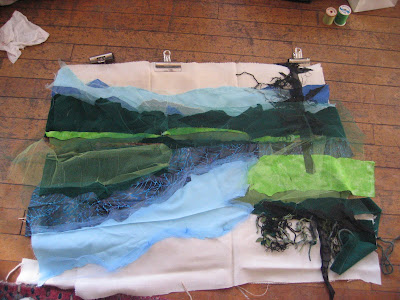 Nettings and gauzes add shading and hold down threads and small pieces, so they won't have to be individually stitched in place. 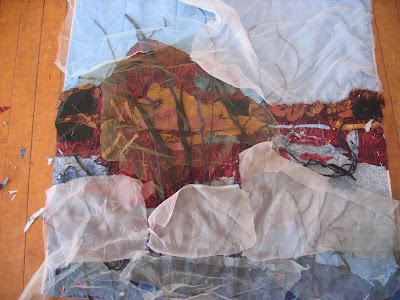 The final piece will be tacked lightly with stitching - either from the back or front (if you like the added texture) and then stretched over a board for framing. Though I've experimented with layers of matte finish Krylon spray to seal textiles - and it's held up pretty well over decades - to be really safe from dust and humidity I prefer framing textile paintings under glass with a channeled molding that prevents the piece from touching the glass.  Framing under glass will also flatten out some of the three-dimensionality or "impasto" of the piece, allowing it to read more clearly. 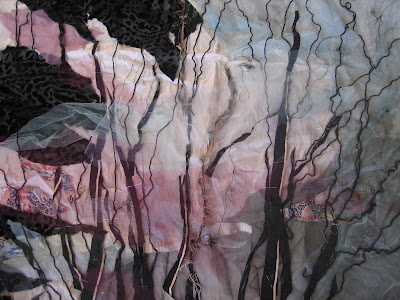 Posted by Carol Dearborn at 12:30 AM No comments: 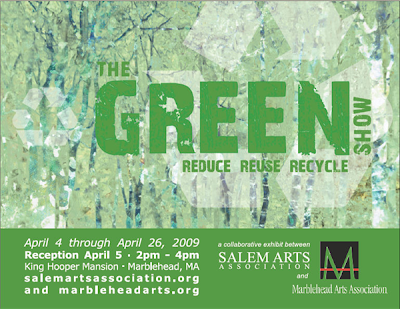 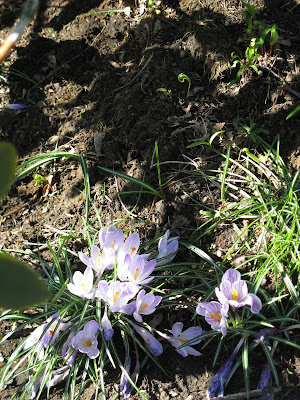 the first real spring day, complete with Crocker Park crocuses - at the King Hooper Mansion in Marblehead, MA.  Despite the fabulous weather, the reception was a great success, with three floors of the Mansion devoted to preservation themes:
The Green Show is a collaborative exhibition between the Marblehead and Salem Arts Associations. The theme presents an opportunity for artists to express different aspects of nature and the environment: 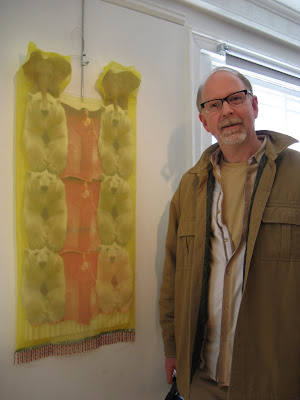 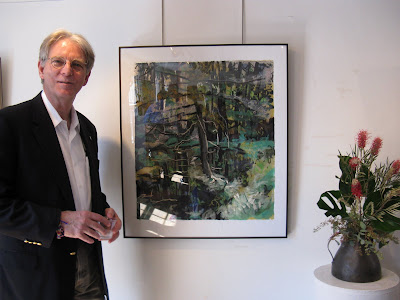 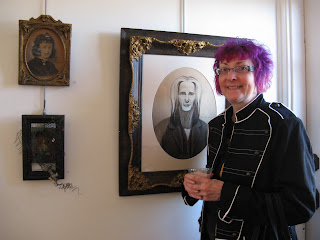 Wendy Snow-Lang with her photograph and painting, "Miss Fifi French" and "Mr. A. F. Ganhound." 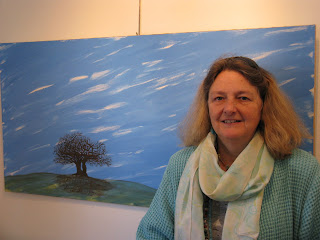 Ellen Hardy with "The Secret of Trees."  As part of the Peabody Essex Museum's Polar Project, Hardy wrote of her work:
“While we stayed fixed on the earth and we look to the sky it reminds us how fast we are actually moving and how quickly a moment passes. The sky is nature’s best film and through my painting I try to capture its beauty.” 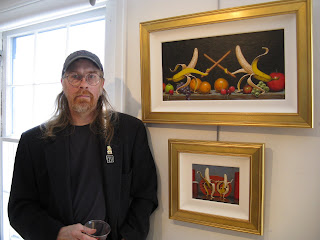 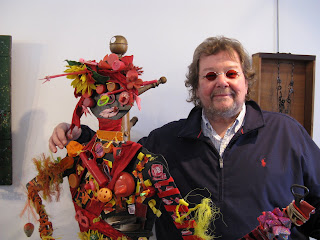 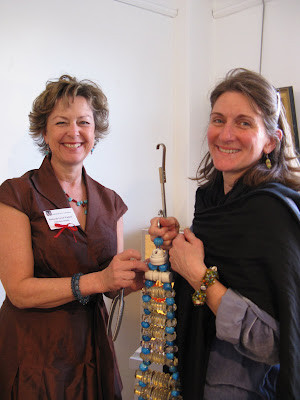 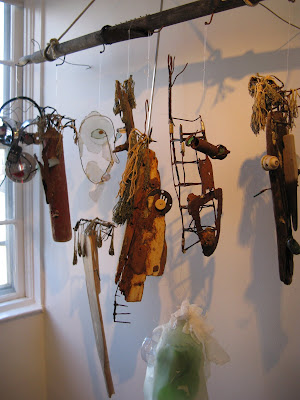 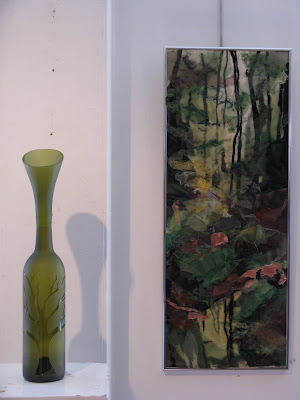 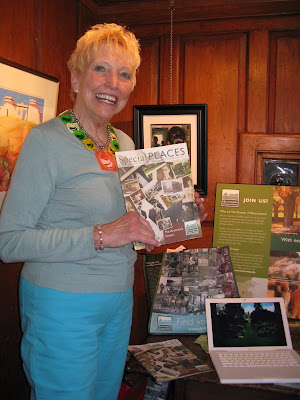 Various environmental groups, including the Marblehead Conservancy, displayed information.  Hamilton, MA landscape painter Katrina Hart represented The Trustees of Reservations, the Massachusetts organization whose mission it is to preserve, "for public use and enjoyment, properties of exceptional scenic, historic, and ecological value in Massachusetts." 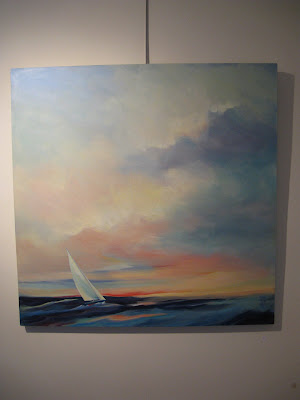 “Fascinating,” says Marblehead artist D.L. Kaulbach, referring to her brainchild, “The Green Show,” as its 127 submissions are hung on the walls in the King Hooper Mansion.

After last year’s successful collaboration with the Salem Arts Association in the exhibit “Art by Association,” the two towns are once again joining forces in “The Green Show,” currently on display in the Marblehead Arts Association, 8 Hooper St. in Marblehead, through April 26. The reason the collaborative show is at the MAA is because it has more space to accommodate the large number of pieces in the exhibit, unlike the SAA, whose space at Artist’s Row won’t even open until May 22, and even then will be small — for now.

Says SAA Director Gary LaParl, “Our dream is to have our own space in the near future. When we get our own space, we hope to invite MAA artist-members.

MAA Director Deborah Greel says she is more than happy to team up with the SAA to attract interest from “organizations that advocate for the environment in this very timely exhibit.”

This is the fourth collaboration between the two arts associations, following “Artists Healed” and “Dancing with the Arts.”

“After last year’s success, we knew we wanted to do another one,” LaParl says.

When Kaulbach, an artist member of both organizations, took her new idea to Greel, she was given the “green light” to request artist submissions.

“We’d been talking about ‘green’ since last summer,” says LaParl. “Since Earth Day is in April, we wanted to tie it in with that.”

Each room in the Mansion has a unique theme, such as “Nature at its Best” on the first floor in the Parlor Gallery. This is where you’ll find landscapes and seascapes by artists Rita Hamill of Manchester and Kaulbach. Head to the back kitchen area and you’ll enter a room filled with artwork “Detrimental to the Environment.” Pieces such as John Wathne’s “High Tide” oil painting of the Prudential building half underwater will shock you, as will the polar bear with CO2 in the atmosphere and plastic in a pond, titled “Don’t Foul With the Fowl” — all self-explanatory pieces.

Upstairs in the ballroom, certain pieces stand out, such as Holly Aloha Jaynes’ “Wild Woman of the Beach,” which she created with “found” trash. The life-size “Frankenstein-like” creation was made from various materials Jaynes had accumulated by scouring trash left on Marblehead beaches. Jaynes has been working in object art for many years, with a long-standing attraction to rust.

“Rusty items, rusty nails… I work on paintings with rust,” she says of the material for which she began to look on the beach and use in response to the tragedy of 9-11. “Kali Ma,” she says, “is the goddess of destruction and recreation. She’s a fierce goddess with a garment belt of skulls, which symbolize destruction.”

She felt her work helped bring clarity and peace from the fear and chaos in the world.

After painting the powerful contrast of dark goddess on rust, which Jaynes says “looked like a goddess with four arms in a fire – of which men in particular are afraid,” she began to notice other odds and ends left on the beaches in Marblehead.

She began collecting lost pacifiers, shoes, gloves and, most recently, what she believed to be false teeth. But after careful inspection, they turned out to be fake rubber teeth — with little skulls on them.

“Wild Woman” is a work in process, says Jaynes, and unless sold during “The Green Show,” she will continue to add objects until the womanly form is completely covered.

The idea to create this female form donned with trash began with a yellow rope she found on the beach.

“It inspired the creation of a yellow rope skirt,” she says, adding that many more unique objects hang from “Wild Woman’s” belt, including a medicine pouch.

For aesthetic purposes, Jaynes decided to incorporate the colors of the rainbow on the lady, beginning with red Tootsie Pop wrappers and old Christmas ribbon found from former tree burnings on Riverhead Beach for the upper torso, working her way down with orange and yellow for the rope skirt and one leg in blue, another leg in purple — and green, of course.

The objects she found most often were bottle caps in various colors, which she uses throughout the form, as well as pieces of shovels, pails or any broken object. Oh, and baby pacifiers.

“I find a lot of pacifiers,” she says. “But I’ve only found one set of false teeth with skulls on it.”

One object she has found a lot of -- Butane lighters, from which she made necklaces and bracelets. But she couldn’t use them on “Wild Woman,” lest she create a fire hazard.

When the exhibit was first announced, Jaynes knew “Wild Woman” would be a good fit for “The Green Show.” The large, vibrant piece is shocking, as it leaves a lasting impression of just how much trash is on the beach.

“But,” notes Jaynes, “a lot of the trash probably floats in from the ocean.”

She considers the found objects to be symbolic of a disposable society.

“A child gets a toy, plays with it a bit, then tosses it,” she explains. “Even teenagers toss bottles, hence the abundance of found bottle caps.”

For LaParl, his eyes were drawn to artwork upstairs on the piano, where cut-up books were reassembled to form a piece of art. And then there’s the Scrabble game on the wall, with environmentally correct terms spelled out.

Through this exhibit, Kaulbach has raised eco-consciousness through found beauty in ordinary objects, painful confrontations and, yes, even natural beauty seemingly unspoiled.

In addition to being an SAA and MAA artist member, Kaulbach is, no doubt, an environmental advocate. In addition to bringing together the artists, she has also reached out to other organizations that are working to help protect and sustain our natural resources. At Sunday’s opening reception, the Marblehead Recycling Committee, the Marblehead Nature Conservancy, the Farmers Market and the Trustees of the Reservations offered information about their programs, and there was a raffle for a composter and recycle bins. Even the National Grand bank joined in as a sponsor for grocery “re-bag” giveaways.

Adding to the beauty of all things “green,” Kaulbach invited three floral designers: Bev Bucknam, Nancy Farrell and Joan Schlueter from the Cottage Gardeners (the organization that cares for the King Hooper Garden) to interpret works of art through floral displays, which decorate the mansion with greens to compliment the exhibit.

Now that spring is upon us and the outside is once again turning green, it’s the perfect time to stop in to check out “The Green Show.”

Posted by Carol Dearborn at 5:39 PM