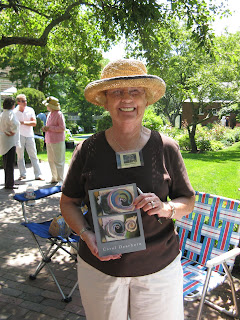 It was fun last weekend to be part of the tour of private gardens in Salem's McIntire Historic District.  The weather was (finally) lovely, and members of the local Garden Club served as guides and hostesses to the event.  (At left one Garden Club member posed with my card at the entrance to an historic garden.)
Visual artists and musicians were invited to add to the festivity of the weekend by stationing themselves decoratively within the gardens.  This was wonderful for me because it meant painting for the first four hours to magical flute music.
Painting "en plein air" of course means outside, but sounds a lot better in French.  So when you paint outside, don't worry about bugs, sun, wind, peeing in the woods, and other annoyances.  There's a certain reverse cache in pretending you do not have a studio, and work only spontaneously and with great speed and joy as gods and muses lead you.   Actually, making art can always be like this, if only we remember... 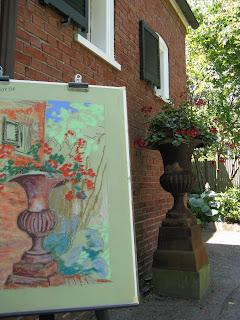 On Saturday I was in the garden at 37 Chestnut Street, sometimes called the most beautiful street in America.  It is a treasure of Federal Period architecture, particularly that of Samuel McIntire, who I'm honored to say is an ancestor, though I show no architectural promise at all. 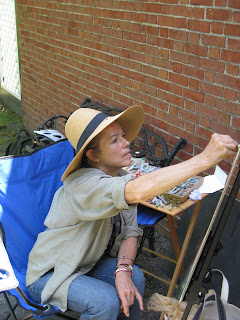 I found a shady spot at the end of the garden with an Italianate urn of geraniums and settled in for a few hours.  Sadly, my speed in painting also pales in comparison to that of grandmother Anita, many of whose watercolors bear notes about the scene painted and the circumstances, along with her signature and, often, "15-min. sketch."  Her 15-min. sketches are just as realized as my 2 or 3 hour ones!  Think the lesson of the day may be not to compare oneself to ancestors... 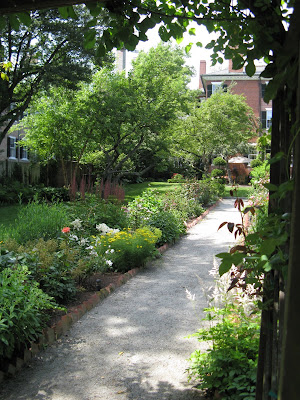 Looking back toward the main house at 37 Chestnut. 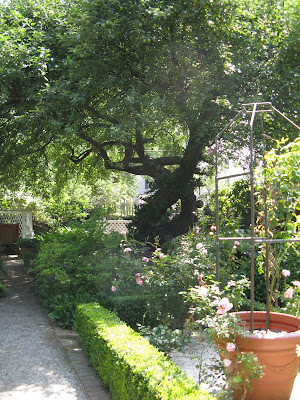 A three-hundred-year-old apple tree next door... 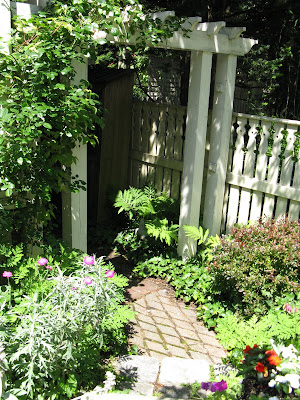 Sunday afternoon I moved to number 3 Hamilton Street to paint in the gardens of a Colonial Revival house, built apparently in 1927, although one would never guess it wasn't 200 years old.  The exquisite gardens around this house are largely perennial, with details like seashell paths and walls covered in clematis. 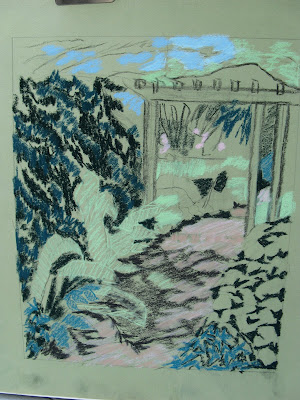 I tried again to find a shady spot, and settled on a sweet, ivy-lined brick pathway toward the back of the house.  The sun came and went under gigantic clouds but I was able to catch some of the shadows of ferns on the brick. 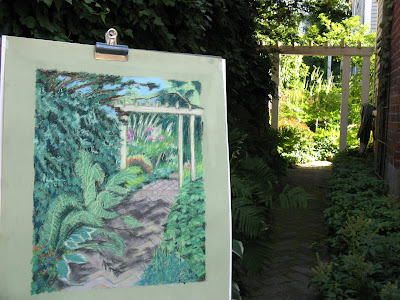 The finished painting sold - a gratifying end to my summer garden tour experience.
Posted by Carol Dearborn at 3:00 PM